The recently passed Inflation Reduction Act (the “Act”) may be badly misnamed, but it’s very positive affect on our flagship strategies is no joke. On July 27, Senator Manchin surprised just about everyone by announcing that he would support a green new deal, after all. The Act passed through Congress in early August and was signed into law on August 16. The Act provides much, much bigger incentives, and across a broader array of technologies, than legislation in prior years. Among other things, the Act provides $370 billion for:

There are also various healthcare provisions totaling $64 billion, which may touch our impact secondaries strategy, and another $4 billion in drought resiliency programs, which are yet to be determined but may apply to both of our strategies (e.g., for water conservation projects, water storage, data collection/analysis, irrigation, crop technology and indoor ag).

Generally speaking, the massive renewable energy incentives within the Act may boost expected returns by as much as 400 bps for qualifying sustainable infrastructure projects. To cite one example, we invested in a portfolio of renewable gas projects earlier this year. Prior to the Act’s passage, we were projecting a gross unlevered IRR of approximately 15%. However, if the portfolio were to fully qualify for the incentives provided under the Act, we would project a gross unlevered IRR of approximately 19%.

The Act far exceeds previous renewables-friendly legislation like (1) the American Recovery and Reinvestment Act (2009), which provided direct payments from the US Treasury (a so-called Section 1603 grant) in lieu of investment tax credits to reimburse a portion of the cost of new renewable energy systems like wind, solar, biomass and fuel cells; and (2) the Protecting Americans From Tax Hikes Act (2015), which extended the availability of production tax credits from certain forms of renewable energy under.

Largest Legislation in US History to Promote Clean Energy 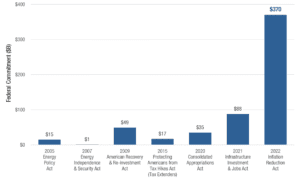 We believe the Act will positively transform impact investing over the next few years, especially renewable energy infrastructure investing. We could not be more excited to be putting capital to work in areas like renewable natural gas, community solar and energy storage than we are right now. Green hydrogen is also an intriguing area of interest. The transition to a more sustainable energy future has begun to noticeably accelerate.

Market conditions. Obviously, the big news is the Inflation Reduction Act. Sustainable infrastructure is now clearly one of the hottest investment sectors for institutional investors, due in large part to the high cost of fossil fuels and new tailwinds provided by the Act. Below are some of the ways we expect the Act to significantly benefit SIF IV. 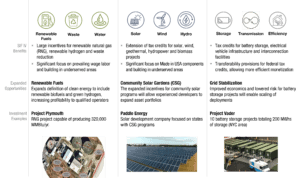 Projects that we are currently reviewing generally now have higher return profiles. A vast number of projects that previously were just below our return threshold, now appear to exceed our return threshold. We may still choose not to invest in such projects but today we have more choices. At a minimum, we expect to benefit from being able to potentially diversify across even more types of projects than previously contemplated.

Our focus currently is RNG, community solar and energy storage. But other areas in which we are seeing interesting projects are EV charging, green hydrogen and hydro power. We have nudged our return hurdles higher in accordance with the new market conditions created by the Act.

Supreme Court ruling re “Greenhouse Gas”. On June 30, the Supreme court ruled in West Virginia v. Environmental Protection Agency that the EPA does not have broad authority to regulate “greenhouse gas” emissions, but rather only has narrow authority under Section 111(d) of the Clean Air Act to regulate CO2 emissions from power plants. Previously, the EPA essentially had attempted to cap CO2 emissions at a level that would force a nationwide transition away from the use of coal to generate electricity. The Supreme Court found that the EPA has not been given that authority by Congress. This ruling likely will have two near term impacts. First, federal regulatory agencies—not just the EPA—have been rebuked and told they must stay within the authority granted to them by Congress. Second, the EPA’s ability to compel a transition away from coal was greatly reduced. There is a good chance that Congress looked at this ruling and decided if the EPA cannot compel this transition, then more incentives are required to nudge it along. The analogy used by some is “more carrot; less stick.” This may be the reason for the quick passage of the Act.

Market conditions. With inflation at record highs and the Federal Reserve committing to 50-75bps rate increases for the foreseeable future, public markets have continued to decline. The growing “denominator effect” of lower public market values has resulted in many institutional LPs being overallocated to the private markets. This comes at the same time many managers are seeking re-ups for their latest funds (often with larger targets after quickly deploying prior funds). While investor sentiment has turned negative, private market valuations have not yet declined in line with the public markets. Instead, private market valuations have stayed roughly flat in the last two quarters as private equity managers tend to be reluctant to revalue their holdings until a future financing round or audit forces them to do so. Investors in those funds have mostly been holding onto those higher valuations too.

We expect reality to set in quickly for PE managers and sellers in Q4 resulting in a flurry of secondary activity at yearend. Many prospective sellers will feel pressure to sell even if pricing seems low to them. Specifically, we expect to see opportunities to buy traditional LP secondaries at substantial discounts because of the “denominator effect.” The denominator effect, in private equity parlance, is when institutional investors find themselves unintentionally overallocated to private equity because the value of their public equity holdings has fallen. This happens when the stock market drops significantly as it has this year. We are already seeing a range of buying opportunities from potential sellers located in the USA, Canada and Europe because of this. Most of the sellers are pension plans where Chief Investment Officers have less discretion and/or ability to deviate from strict asset allocation policies.

In the meantime, we are very active transacting in the form of preferred equity structures, where buyer and seller do not have to agree on the value of the asset today, but rather only have to agree on how to divide the future cash flows from the asset. Our structures typically provide that we receive 100% of future proceeds until we have recouped the purchase price plus some preferred return AND where there is substantial downside protection—often our cash outlay is only 25-50% of the value of the assets in the structure. These are exactly the kind of deals we want to be doing in times like these, when Federal Reserve Bank actions and other factors, may result in a hard landing in 2023. Experienced managers with dry powder can make outsized returns in choppy seas.

Secondary pricing. Market pricing fell again in the second quarter to 83.2% of Q1 2022 NAV. See chart below from PEFOX Research. This data is for the broad secondary market; conditions are slightly different within the subset of impact funds on which North Sky focuses. Generally, we believe market sentiment is that prices are expected fall again in the coming quarter. The volume of traditional LP secondaries is thin right now, with the bid-ask spread often being too wide to enable those types of transactions to occur. Sellers are still seeking the higher pricing of yesterday, while buyers are waiting for lower entry points in the future. 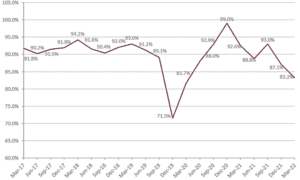 The Act’s Impact on our Secondary Strategy. We expect the impact of the Act is twofold. First, with respect to existing investments in Clean Growth III-V, we expect the Act is likely to increase valuations and pull forward exit timing for those assets. Second, we believe the Act will provide tailwinds and improve the growth trajectory of impact assets across five key areas within the purview of Clean Growth VI (“CG VI”). 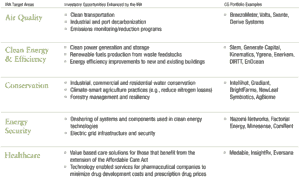 The Act, with its massive renewable energy incentives, is an absolute game changer for our sustainable infrastructure strategy and is likely to also positively affect our impact secondaries strategy.  Its influence will be immediate.

Here, at North Sky, we are playing an active role in the global transition to a more sustainable future. That transition appears to be a multi-decade investment opportunity in major areas like energy, transportation, food, water, sanitation and healthcare. Our flagship strategies are differentiated, authentic and impactful. To learn more, please contact Gretchen Postula.

Also, given the Hurricane Ian news, our thoughts are with our readers in Florida, Georgia and the Carolinas and we hope they are all safe (and stay that way)!

©2022 North Sky Capital. Information contained in this publication is based on data obtained from sources we deem to be reliable, however, it is not guaranteed as to accuracy and does not purport to be complete. Nothing contained in this publication is intended to be a recommendation of a specific security or company nor is any of the information contained herein intended to constitute an analysis of any company or security reasonably sufficient to form the basis for any investment decision. These materials are not intended as an offer to sell, or the solicitation of an offer to purchase, any security. Any offering will be made only by means of a private placement memorandum or other appropriate materials (the “Offering Documents”) that will contain detailed information about any investment to be offered; no sales will be made, and no commitments to enter into investments will be accepted, and no money is being solicited or will be accepted, until the Offering Documents are made available to prospective investors.
North Sky Capital Contacts
Scott Barrington
Managing Director - CEO
(612) 435-7170
sbarrington@northskycapital.com
Gretchen Postula
Managing Director and Head of Investor Relations
(612) 435-7177
gpostula@northskycapital.com
Download PDF To Read our full Market Commentary
Download Pdf
Previous
Next